Now, oh, $19 billion for these fighter-offensive jets, and that is for the paying out on the lot price, not the tens of thousands a day or month to keep them aloft.

I never believed the crap about Canada being the Hippie, Pacifist, Land of Peacemakers and Peaceniks. I have seen the Canadian military in several places, including Saudi Arabia, and I even was a college instructor at the NCO Academy in Texas where Canadians were in the program for their last Command Sgt. Major stripe.

But then, even those “follow the science” atrophysicists and space scientists are in the game for, well, money, making what they can because they can, and for, well, the military side of things.

Reading The Times of Israel featuring an American who ended up in Israel for 5 years, I have no problem seeing through the narrative of this hyper-intellegient guy who worked on the telescope to end all telescopes, James Webb — Space is changing. Webb is just the start, says ex-Israeli who was in from its dawn

This fellow is on a turbo charged pathway to militarize space — They are chauvanistic and driven by their own version of what the world needs. Space, commercialization of space. Tourism in Space. Alas, Internet of Things, Internet of Nanothings, Internet of Bodies and Brains. These guys do not see the intended and unintended consequences of their avocations and passions and lusts.

The next big leap, for me, is to think about how to leverage the emerging space infrastructure, stuff like Starship [SpaceX’s planned interplanetary rocket] or Blue Origin’s New Glenn rocket, which has a really large doubling or even tripling of fairing size, so you could launch major modules and very large mirrors. Those are game changers.

Or perhaps we could connect astronauts in a habitat in low Earth orbit to an orbital transfer vehicle to get out to L2.

There are all kinds of architectural paradigms we can envision for leveraging where we are today and where we see things headed that would be paradigm shifts.

He went to Israel because of his son’s leanings toward Christianity, a no-no for a Jew:

It was the fall of 2009. I’m living in Boulder, Colorado. The base of the Rocky Mountains is right outside my window. I moved here to work for Ball Aerospace. I left Ball and went to work for Boeing on planetary missions. Everything was great.

But my younger son was an undergraduate at the time and was getting interested in converting to Christianity. He’d gotten involved with a fraternity that was convincing him — he’s talking about messianic Judaism.

I asked friends what I can do to shake him up a bit. They said, “Take him to Israel.” I’d never been to Israel before. I’ve thought about it, but it was always either Israel or Yellowstone, Israel or the Grand Canyon. It never made it to number one on my list, which is probably true for most American Jews. 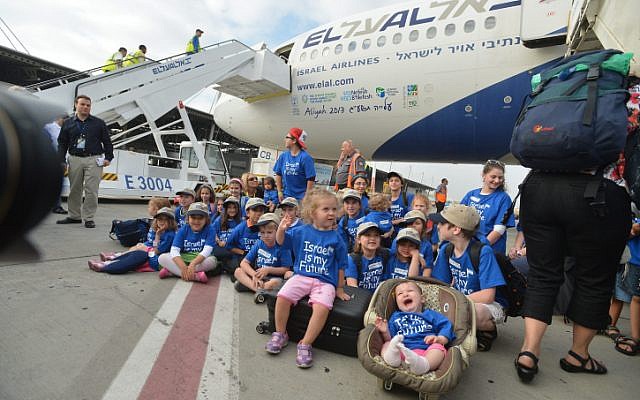 [Illustrative: North American Jewish immigrants to Israel arrive in a special flight on behalf of the Jewish Agency and the Nefesh B’Nefesh organization, at Ben Gurion airport in central Israel, on July 23, 2013. (Yossi Zeliger/Flash90)]

So I planned a trip. I talked to my rabbi and other people about how to have a spiritual, meaningful adventure. Their first advice was, “Don’t stay at hotels. Find rooms to rent in people’s houses. You’ll have more of a connection.”

I wanted to wake up the Jewish part of my son’s soul.

To make a long story short, it didn’t work on him, but it sure worked on me. I went home and friends said they’d felt a shift in me. I’m not religious but I’m spiritual. I didn’t know what aliya was. I met with my rabbi, and she said, “Oh, you’re going to make aliya.” I said, “I don’t know what that is, but I’m thinking of moving to Israel.”

This has become more and more the Jewish question, really. All those ISRAEL firsters wanting more land for the interlopers, Jews, in Palestine. And they are something else, the Zionists, that Nuclear Armed State. Something else.

Israel’s New Air Force Head Talks Scared and Tough on Iran: He Has Little Reason to be Either — Two things prevent an all-out war between Israel and Iran. The first is that Israel knows that attacking Iran will end in a total Israeli defeat. The second is Iran’s exercise of discipline in the face of ongoing threats by both the U.S. and Israel. by Miko Peled

It is interesting to see the interconnections, the connectivity, the realm of the land in the areas of finance, investing, computing, AI, surveillence, and, well, power. ns

It is an upside down world, where seeking some sort of peek behind the curtain of tribalism, those tribal roots, that becomes verboten.

These are vital tasks, getting under the skin of the dark forces afoot to control humanity. And, I know, that sounds so hyperbolic, but it isn’t: the elites are investing in soul mining, mind crafting, data thievry, body snatching. Really — Some interesting history here:

In 1493 Pope Alexander VI issued a Papal Bull of Demarcation that split rights to claim the new world between Spain and Portugal. That agreement was revised by the Treaty of Tordesillas the following year, pushing the pole-to-pole meridian further west to 370 leagues beyond the Cape Verde Islands.  That adjustment meant Portugal was entitled by Papal decree to dominate and colonize lands discovered by Pedro Alvarez Cabral six years later, those became the nation of Brazil.

Catholics weren’t the only Europeans enriched by the abundance wrested from indigenous lands, Jewish people benefitted as well. Infrastructure investments that for centuries were directed into minerals and agricultural products are today being applied to the capture of behavioral data for human capital valuation. The colonial interests that built Brazil’s sugar empire are again on the scene, which is not surprising given that communities of faith are hubs for social service delivery. For that reason, they are poised to serve as ready-made channels through which global capital can bring industrial-level poverty management to scale. The sugar connection interests me, because I explored the idea of hypothecation and mortgaged human life and data collection in the so-called “community school” model in the context of sugar refineries in a post a wrote a few years back.

Sir Ronald Cohen is a key figure in global impact investing. A Harvard MBA and the father of British venture capital, Cohen fled to the UK with his family from Egypt in the 1950s. He is Jewish, in fact his wife’s now deceased father was Yossi Harel of the Exodus, but moves fluidly among all circles in his role conducting the symphony of the global technocratic social impact transition. Cohen has appeared at the Vatican’s social impact conferences as well as conferences on Jewish venture philanthropy at Fordham University in New York. Ronald Cohen collaborates with Omidyar Network, an organization working on many fronts to remake Brazil as a data-driven society suited to the global impact economy.

Coming from one of England’s most notable families, the young Sacha was privately educated at a number of schools in the southeast of the country before going on to study history with a focus on antisemitism at Cambridge University. Other family members – who have chosen distinct spelling for their surname – include Professor of Developmental Psychology at Cambridge Simon Baron-Cohen, playwright Dan Baron-Cohen, filmmaker Ash Baron-Cohen, and composer Erran Baron Cohen.

Even from an early age, Sacha was reportedly obsessed with the Jewish state. “He was very Zionist, very involved in Habo,” recalled one friend, referring to Habonim Dror, a left-wing Zionist group of which he was a member. Others remembered him as “a very nerdy, very funny, Israel-oriented guy” who went to live on a kibbutz in his youth. He appears to idolize Shimon Peres, traveling to meet him in 2012 and sharing quotes from the former Israeli president on his social media accounts. Peres, of course, oversaw the genocide of Palestinians in 1948, attempted to sell nuclear weapons to Apartheid South Africa, and carried out the ethnic cleansing of the Galilee region.

The pro-Israel propaganda was turned up to 11, however, in “The Spy,” a 2019 miniseries drama Baron Cohen produced himself and played the title character. Directed by former IDF paratrooper Gideon Raff, “The Spy” lionizes Mossad agent Eli Cohen, who goes deep undercover, embedding himself in Syrian high society, providing intelligence to the Jewish state crucial for its victory in the 1967 Six Day War against its neighbors. To this day, Israel illegally occupies Syrian and Palestinian land captured in 1967.

The series is a relentless celebration of Mossad and Israel, contrasting them with the barbarity of their neighbors. As The Daily Dot’s review of the show commented, the overriding message was “Cohen good/Syrians evil.” The Washington Post also noted that “The Spy” was a central part of a wider Mossad recruitment drive. Eli Cohen was a real historical figure and a hero to many of the most passionate Zionists. Sacha remarked that he sees himself in Eli and claimed that what they do is rather similar. (Source)

Will any of these people, goyim or Jew, Muslim or Hindu, any of them, stop the madness of militarism and oppression and the dirty dealings of a Global-in-scale Mafia? Money hoarding? Planetary destruction?

And then, there is Jon Leibowitz, err, Stewart —

Speaking with The Problem staff writers, Jay Jurden and Henrik Blix, on the Dec. 1 podcast, Stewart called their attention to the appearance of the goblins who run the Wizarding World’s leading financial institution, the Gringotts Wizarding Bank. “Talking to people, I was like … ‘Do you know what those folks that run the bank are? Jews!’ … That’s a caricature of a Jew from an antisemitic piece of literature and J.K. Rowling looked at that and went, ‘Can we get these guys to run our bank?'”

Stewart was specifically referring to The Protocols of the Elders of Zion, a notorious antisemitic text that dates back to the early 20th century, and features flagrantly offensive Jewish caricatures that are still glimpsed in racist propaganda today. Remembering his experience watching the Harry Potter films in theaters, Stewart says he was shocked to recognize similar imagery in a major studio blockbuster.

“It was one of those things where I saw it on the screen, and I was expecting the crowd to be like ‘Holy s***, she did not — in a wizarding world — just throw Jews in there to run the f****** underground bank,'” Stewart said. “And everybody was just like: ‘Wizards!'”

In his Twitter thread, Shimunov shared the scene that Stewart may have been referencing, which appeared in the film franchise’s first installment, Harry Potter and the Sorcerer’s Stone, directed by Chris Columbus. He also called attention to the “Jewish stars” that allegedly appear at the bank in the first film and were left out of future installments.

But then Leibowitz steps back on his yammering about antisemitism — Jon Stewart Says J.K. Rowling Is Not Anti-Semitic After ‘Harry Potter’ Comments Go Viral

Rowling, who Forbes ranked as the world’s second-highest paid author in 2020 with $60 million in earnings over the previous 12 months, has faced criticism for comments denounced by some as transphobic. The British author will not appear on the upcoming HBO Max special commemorating the 20th anniversary of the Harry Potter movie franchise’s debut, believed by some to be related to the franchise’s three main actors speaking out against Rowling’s statements on transgender people.

So here we are, stuck in this upside down world, of transgender comments blacklisting RK Rowling, and then, the Entertainment Giant Jon Leibowitz, able to yammer about his people, and then, the damage is done. Apology? It’s all part of the marketing of Jon Leibowitz Stewart.

Blasting into space, a race away from dealing with humanity’s, ecology’s, cultures’ problems. Jokes and military. Hollywood and CIA. What a lovely combo.